Cheer on Vail's Yeti Hockey team this season as they celebrate their 7th year at Dobson Arena. This season, the Yeti will face competition such as the Sun Valley Suns, Boulder Bison, Aspen Leafs, and more.

Over this past weekend, the Yeti picked up two wins against the New England Snowflakes. The final scores for the weekend games were 9-5 and 6-3, bringing the Yeti's winning streak to 3 in-a-row. Yeti players Dom Panetta, Dan Turgeon, Justin Elmore and Preston Blanek and goalie Spencer Gold carried the team to their weekend wins. 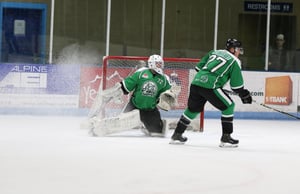 The action continues this weekend at Dobson Arena, as the Yeti take on the Denver Leafs. Both games, Friday, February 21st and Saturday, February 22nd, begin at 7:45 p.m. The Leafs are coming to town with their first line of Nick Mazzolini from Providence College and the German DEL, Bill Sweatt who was briefly on the Vancouver Canucks, and Ross Jarvi-Ring from the Swedish SVL National League, so it should be a good match-up.