After falling to the Sun, the Vail Yeti hope to beat the FDNY

Cheer on Vail's Yeti Hockey team this season as they celebrate their 7th year at Dobson Arena. This season, the Yeti will face competition such as the Breckenridge Vipers, Boulder Bison, Aspen Leafs, and more. 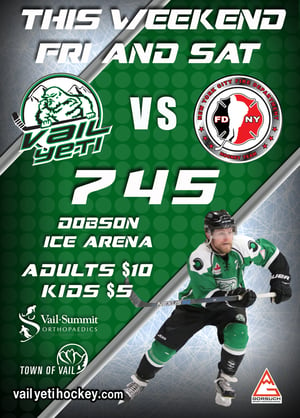 Last week the Yeti faced the defending Black Diamond League Champions, the Sun Valley Sun, and unfortunately lost to them in both games. The Yeti were trailing the Sun 3-2 going into the third period of Friday's game, with goals by Will Compton and Dalton Speelman. The Sun, however, scored two more goals, finishing out the night with a 5-2 win over the Yeti. On Saturday, the Yeti ended the second period down 5-0 to the Sun. The Yeti's Justin Elmore matched this deficit with a three goal "Hat Trick" in the third period, leading to a 5-4 game. Despite this effort, the Yeti fell to the Sun 8-4. So far, the Sun Valley Sun have remained undefeated in the 2020 Black Diamond League.

The Yeti are looking to regain their winning streak this weekend as they face the New York Fire Department (FDNY) at Dobson Arena. Both games, Friday, January 10th, and Saturday, January 11th, begin at 7:45 p.m. During the games, the Yeti will be raising funds for the Eagle Country Emergency Responders Fund.
Tickets

General Admission tickets are $10 for adults and $5 for children 12 years old and under. Tickets can be purchased at the door or at vailyetihockey.com. Additionally, KZYR has a limited number of tickets available on our True Local Deals website. You can also tune in to KZYR 97.7 to listen and win tickets.