Wildlife on the Move

Avon, CO – As the weather gets warmer, bears are coming out of hibernation and mountain lions are tracking migrating deer herds. There have been many reported sightings of mountain lion in the Valley throughout the winter. The Town of Avon reminds residents and guests to be aware and take precautions to avoid conflicts between humans and animals.

Bears become active in mid-March and are hungry after their winter hibernation. With a nose that's 100 times more sensitive than humans, a bear can smell food five miles away. Their natural diet is grasses, berries, fruits, nuts and plants, but will resort to persistent scavenging when they find an easy human-provided food source.

The public is advised to take the following precautions:
• Keep doors and windows closed and locked
• Remove tree limbs that might provide access by a climbing bear to upper level decks and windows
• Get rid of bird feeders and dog food
• Burning food off from barbecue grills and clean after each use
• Don't leave food, trash, coolers, or air fresheners outdoors or in your vehicle.

It is also recommended that dogs and cats be kept indoors unless the pet owner is with their pet outside.

It is against the law in Avon to intentionally or unintentionally feed wildlife. Trash should only be placed out on collection days and no earlier than 6:00 a.m. The Avon Police Department should be contacted if the animal is in a trash can, is in close proximity to a house, is near children, or appears to be a threat to domestic animals. For more information, contact the Avon Police Department at (970) 748-4040. 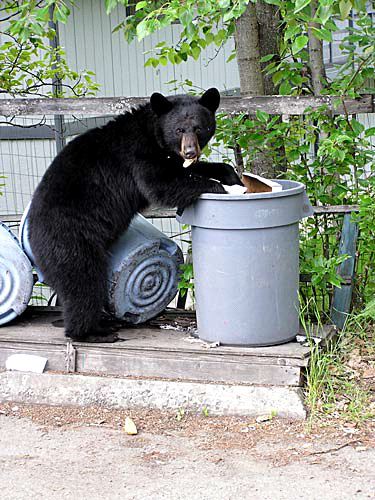